Cobra King Forged One Length irons are designed to promote consistency via a single head weight and single club length. The club heads are USGA legal and are intended for low handicaps.

Who are these clubs for?

These clubs are great for experienced, low handicap golfers with very high swing speeds. As the only “forged” set of single length irons on the market, Cobra has pushed the boundaries of the single length iron methodology with this set in the effort to attract better iron players.

If you’re a mid- to high-handicap player, you may want to check out the other Cobra one length set, which are “cast” irons which don’t require high swing speeds:

The overall look of the clubs is both traditional and timeless, and players accustomed to forged irons will not be disappointed by the look and quality of the club heads.

As far as feel when striking the ball, there is some feedback on heel or toe hits, but not as much feedback as I was expecting. The soft feel may be due to the plastic inserts in the back of the irons. A center-struck ball produces little to no feedback, which is what I expected from forged clubs.

Unlike other homogeneous single length iron sets, the design from club head to club head does vary greatly, from specialty design to cavity so half hollow to full hollow as you move from pitching wedge to 4-iron. Cobra call this technology shift throughout the set “Tecflo.”

Personally, the concept of Tecflo in this specific set of irons feels like an unnecessary feature. As I progressed through the set to get my carry numbers, I had no problems hitting baby draws with the P, 9-iron, and 8-iron. But once I got to the 7-iron, it became much harder to hit baby draws as I began hitting baby cuts for the 7-iron through 4-iron. Since all the club heads are the same weight, I suspect that this shift in shot shape tendency is due to the change in technology from head to head, specifically the weight distribution from heel to toe.

I also noticed that the baby cut shots on the long irons tended to go 10 yards or so longer than the baby draws with the same club.

Cobra King Forged One Length Irons are priced similarly to standard forged irons at $999 for the stock set. This price point is on the upper end of the single length irons market, but since it is the only forged set of single length irons available, it’s hard to say whether this price is high or low.

Cobra also produces a cast irons version called the Cobra King One Length (same name but without the “Forged”), which will be reviewed separately soon.

The trade-off given for increased accuracy is of course a shallower descent angle of the ball as it falls from the sky. This trade-off means that on the 4, 5, and 6 irons’ stronger loft leads to more roll-out when the ball lands on the green.

Cobra has tried to address this issue with their TECFLO technology, keeping the lofts at only 1 degree stronger than standard irons.

The gaps in the set are fairly consistent between 10 and 15 yards within the PW through 8-iron. However, there was a clear drop-off in distance gaps from 7-iron through 4-iron. I tried during 3 separate trips to the simulator to get different distances from these 4 thru 7-iron clubs, but kept getting the same numbers.

During my third session, I rotated shots between the Pinhawk SL 4-iron and the Cobra Forged Single Length 4-iron and got these numbers:

As you can see, the club speed and the ball speed are relatively close, but the apex is lower for the Pinhawk due to the lower loft of the club (20º vs 23º). This is why I say that the Cobra Forged One Length clubs are for people with very high swing speeds — it’s the only way to get the distance out of the 4 through 7-irons since the lofts are not strong enough.

On the day that I recorded the data below, I hit most of the shots with very similar swing speeds, which averaged an 81 mph club speed and a 105 mpg ball speed.

As you can see in the tables below, the Cobra King Forged One Length lofts are only 1 degree stronger than a typical set of irons from club to club. This small shift in loft is puzzling since I found that the long irons were not travelling as far as I would have liked, which would have been improved by a couple degrees less loft on the 4-iron and 5-iron clubs.

Where You Can Buy Cobra King Forged One Length Irons Where to buy Cobra King Forged One Length Irons 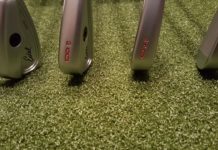