Unfortunately, the irons themselves do not seem to be designed for single length shafts since the Mazel lofts are nearly identical to standard iron sets. As a result, the carry distances are shorter than expected and the gaps between clubs are inconsistent.

When I first picked up these clubs, the first thing I noticed was how light they were – these have to be the lightest irons that I’ve ever hit.

The second thing I noticed was how small the grips felt — I believed that there was a standard size for a “standard” size grip, but I really feel like the diameter of the grips are at least 1/16 smaller than what most people consider standard. If you have small hands, these irons would probably feel great to you.

Finally, I thought that it was odd that the irons are marketed as “single length” but the tag-line below the logo on the irons themselves reads “single weight.”

The overall look of the clubs is quite nice, with a deep blue section framing the Mazel logo. The remainder of the club head consists of a combination of shiny silver and matte silver finishes.

The design from club head to club head is consistent from the high irons to the 6 iron, but changes from a cavity back to a muscle back for the 5-iron and 4-iron, probably to help golfers get balls up in the air when using the long irons.

The grips are black with silver accents and are Mazel branded, which is something that you don’t often see, even in irons that are much more expensive.

As far as feel when striking the ball, I had a much harder time hitting the ball out of the center of the face that when I hit other single length iron sets. The shafts felt “whippy” (to use a term I heard at a driving range once) and I suspect that my inability to hit the sweet spot had something to do with the extreme flexibility of the shafts.

Is purchasability even a word? After an exhaustive search, I could not find a website for the manufacturer of these irons. The only thing I could find was a page on Alibaba, a Chinese wholesaler website.

With the lack of a corporate website and the low price point, I think that it’s safe to assume that these clubs are made in China in bulk and sold in lots to people who then turn around and sell them on Amazon at a small markup.

The gaps in the set are not very consistent from club to club. This could be a result of my inability to consistently find the middle of the club face due to the very flexible shafts, but I did hit many balls with each club on an indoor simulator.

Here are the best of my shots using the Mazel Single Length clubs:

The club length of these single length irons is 37.5”

As you can see in the tables below, the Mazel lofts are almost identical to a typical set of irons from club to club, which is contrary to most single length sets and why the carry distances of these clubs are so short — longer shafts hit balls farther, so with a shorter shaft and the same loft, the result is less distance.

Where You Can Buy Mazel Single Length Irons 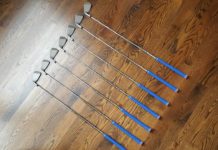 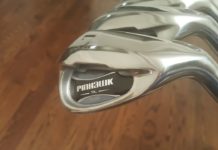 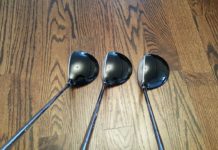 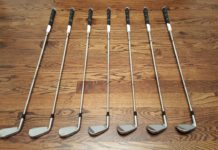